The 2018 Annual conference took place at The Women’s Library at the London School of Economics. The keynote speaker was Dr. Kate Dossett (Leeds)

The 2017 Conference took place at the University of Oxford, co-sponsored by the Rothermere American Institute and The Oxford Research Centre in the Humanities, on 6th July 2017. Our keynote speaker was Prof. Diana Paton (Edinburgh) who spoke on an aspect of her current research project on ‘Mothering Slaves’ within the context of the broader Americas.

2015 conference: Gender, Religion and Activism. Held at Royal Holloway and again co-sponsored by the Bedford Centre for the History of Women, this conference attracted scholars from the UK, Europe and the US, who interrogated a wide range of themes related to the intersection of religion and activism.

2014 conference: Ms/representation: mass media & feminisms in historical context. Held at the University of Westminster, this conference built on the them 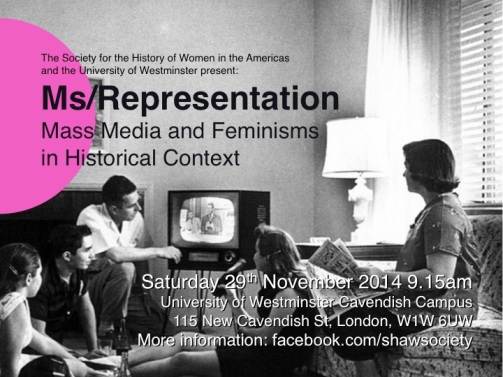 e of the Kingston conference. Delegates explored a wide range of areas, from teenage magazines to representation of gender through film.

2013 conference: The Feminine Mystique at 50. In collaboration with theBedford Centre for Women’s History at Royal Holloway, University of London, SHAW marked the fiftieth anniversary of Betty Friedan’s feminist classic The Feminine Mystique. The conference resulted in the publication of a special issue of the Society’s journal, History of Women in the Americas, including articles based on papers delivered at the conference.

In addition, SHAW co-sponsored a conference at St Mary’s University in April 2013, on the theme of Freedom, Rights, Power: Recasting Women’s Struggles Across the Americas Since 1900.

2012 conference: Women in Magazines: Research, Representation, Production and Consumption. Held at Kingston University, the conference brought together over 50 scholars from the UK and abroad. The edited collection, with chapters based on selected papers, was published with Routledge in 2016.

2011 conference: Held at Brunel around an open theme, it was at this conference that the decision was taken to rename the society

Society for the History of Women in the Americas

My Tweets
Follow Society for the History of Women in the Americas on WordPress.com